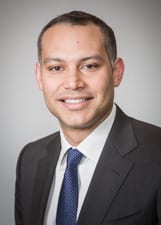 Dr. Ortiz completed his residency in neurology and fellowship in stroke/neuro-critical care at Thomas Jefferson University Hospital in Philadelphia. In 2006 he moved to New York City to complete fellowship training in interventional neuro-radiology and endovascular surgery at the Hyman-Newman Institute of Neurology and Neurosurgery at Roosevelt Hospital, were he served as attending physician and director of the fellowship program until June of 2012.

Among his numerous accolades, Dr. Ortiz was honored with a Proclamation by the New York State Senate in 2012 for his dedication to community education and outstanding patient care. In 2010 he received The American Heart Association’s Young Heart Award for achievements in Cardiovascular Science and Medicine and also the American Heart Association’s Tu Corazon Latino Award for dedication to patient education and community health. More recently, in 2013, he was recognized as one of the Men of the Year in the City of New York by El Diario La Prensa newspaper. In 2014, he received the Leadership and Vision Award of the American Heart and Stroke Association. In 2015 he received the Latino Trendsetter Award and in 2016, 2017, 2018 and 2019 he was selected to the New York Super Doctors list. In 2017 and 2018 he was named as Castle Connolly Top Doctor and New York Times Top Doctors.

Dr. Ortiz specializes in endovascular (interventional) treatment of cerebral aneurysms, embolization of brain tumors and vascular tumors of the head and neck region, cerebral and spinal arteriovenous malformations, treatment of craniofacial vascular lesions (venous, lymphatic, AVMs, hemangiomas) in adults and children, stenting of carotid artery stenosis, as well as revascularization procedures for acute stroke. He is known for his dedication to community education, patient satisfaction and outstanding patient care.